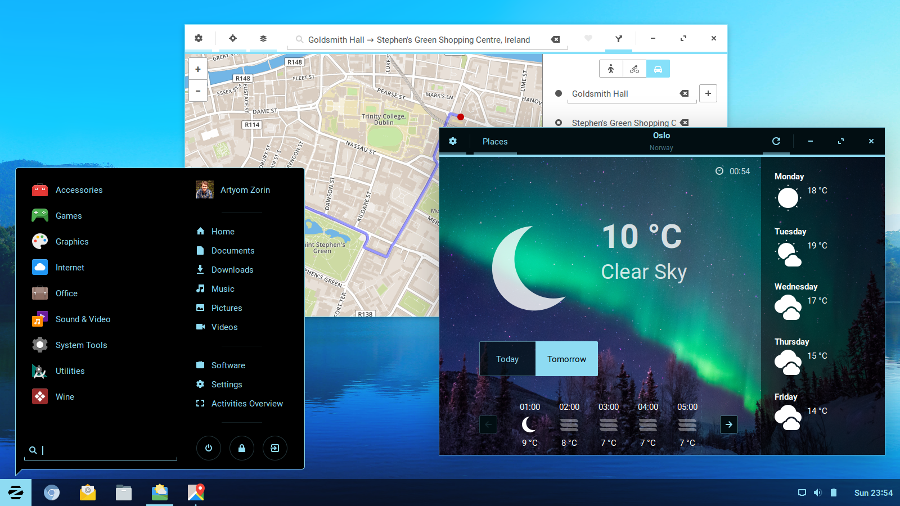 We’re excited to announce the release of the Zorin OS 12 Beta. This is a pre-release version which we have created to get your feedback & bug reports on what we’ve built so far.

Zorin OS 12 is the biggest new release in the history of Zorin OS. With this new version, we’ve introduced an entirely new desktop experience that will make your computer more useful, more powerful and more enjoyable to use.

We have entirely reimagined the Zorin Desktop environment in Zorin OS 12. This new version of Zorin Desktop is powered by Gnome Shell and packs an enormous variety of new features:

With a tap of the logo/super key on your keyboard, you can instantly see everything that’s happening on your computer from the Activities Overview. Every window and every desktop comes into view so you can browse, rearrange and organize your apps as they’re running. New workspaces are added dynamically, so you’ll never run out of room on your desktop.

As soon as you start typing at the Activities Overview, you can search for anything on your computer and beyond. Not only can you find your installed apps, Universal Search also suggests new apps to download from the Software store as you type. In addition, you can now search for files and even inside of apps. Thanks to search providers, apps can extend the functionality of the Universal Search, so you can search for a city to find the local time or enter in a maths sum and see the answer live without even opening the Calculator app.

We’ve introduced notifications which are more rich and actionable than ever before. Notifications are now interactive, so not only do they inform you of what’s new in real time, but they let you take actions without interrupting your workflow.

If you’ve ignored or dismissed a notification, you can now find it from the clock menu in the panel, alongside your events and reminders.

Zorin Desktop now supports advanced display features on newer computers. When you use Zorin OS 12 on a laptop or tablet with a high resolution display, the interface will automatically scale. That way, buttons and text will stay at the optimal size for your screen, but they’ll become crisper and clearer than ever before.

The new desktop has been designed with touch screens in mind, so tablets and convertible laptops can enjoy a more comfortable user experience. New touch gestures have been introduced to improve desktop navigation:

If your laptop has a built-in light sensor, the display brightness can now intelligently change based on your environment’s lighting.

We’ve worked incredibly hard to make all the new features of Zorin Desktop accessible and easy to use. That’s why we’ve built a suite of desktop extensions that make Zorin OS work and behave like the desktop you’re familiar with. Everything is right where you expect it, so you won’t need to learn anything new to take advantage of your fresh new desktop.

This is only scratching the surface of what’s new and better in Zorin Desktop 2.0. Thanks to the hundreds of new features in this release, Zorin OS 12 has the world’s most powerful desktop.

With the new Zorin Desktop 2.0 environment comes a fresh new look. The dark tones of the interface shell create a contrast between itself and the app windows to give a clear distinction between the system UI and the work you’re focusing on.

Many apps now take advantage of header bars which merge the window buttons and app controls into one bar. The result is a sleeker new look for your apps that also saves screen real estate.

The application theme has seen significant refinements and bug fixes. In many apps where the content takes centre stage, dark mode is now enabled automatically to reduce distractions from the interface controls.

Zorin OS 12 introduces a stunning new icon theme based on Paper. With a design based around flat geometric shapes and bold colours, this new icon theme will make your desktop look more elegant and modern.

Many more subtle design enhancements have been made throughout the desktop, such as the introduction of the Roboto system font and new delightful animations that also make desktop interactions more understandable. Zorin OS has always kept user-friendly design as its north star and with version 12 we’ve raised the bar even further.

We have brought together the functionality of the Zorin Look Changer and Zorin Theme Changer into one app called Zorin Appearance. With a click of a button, you can change the desktop layout to match that of Windows versions and Gnome 3. Premium editions of Zorin OS 12 will also feature Ubuntu, Gnome 2 and macOS-like layouts (coming soon).

Zorin Appearance also lets you customize even more detailed aspects of the desktop including fonts, animations, window scaling and the panel to name a few. Zorin Appearance is the go-to app for customizing your desktop, quickly and simply.

A New Way to Experience Software

Zorin OS 12 introduces the new, faster Software store. Software is the best way to browse, install and now upgrade apps. It acts as the central point of the Zorin OS app ecosystem.

Chromium has been selected as the new default web browser for Zorin OS 12. As the Open Source base version of the acclaimed Google Chrome browser, Chromium provides a tremendous user experience. From its fast browsing speeds to the thousands of extensions it supports from the Chrome Web Store, surfing the web in Zorin OS just got a whole lot better.

Linking your Google account lets you do so much more in Zorin OS 12. You can now browse your Google Drive files from the File Browser and view your synced Google Photos in the Photos app. Simply open the “Online Accounts” panel from Settings to log into your Google account and you’re ready to go.

A number of new applications have been introduced in Zorin OS 12 to help you get more done, better.

Maps lets you view maps and satellite imagery from around the world. Get directions for when you’re driving, cycling or walking from A to B and beyond.

Weather gives you an aesthetically pleasing view of the weather conditions and forecasts at home and abroad.

Photos replaces the Shotwell Photo Manager app in Zorin OS 12. It introduces unparalleled integration with the desktop and works beautifully with your online accounts.

The newly introduced Videos app now works with online video sources such as YouTube, Vimeo and worldwide news channels, so any video is only a tap away.

Zorin OS 12 is powered by Linux Kernel version 4.4, which now works with even more hardware and introduces performance enhancements and security improvements.

With Zorin OS 12, we are introducing a new release schedule going into the future. Major releases of Zorin OS will now be made once every 2 years. In between, a number of point releases will be made that will include incremental updates to the built in apps as well as support for new hardware, security fixes and various under-the-hood improvements. This gives you the optimal balance between the robustness of tried-and-tested technology and the latest and greatest features. By focusing on one release at a time, we will be able to provide the best possible experience to everyone using Zorin OS.

Disclaimer: Please keep in mind that this pre-release is not recommended for installation on production machines due to some potentially unstable software included.

Please leave us some feedback and report bugs along the way when testing this Beta. This will allow us to improve Zorin OS 12 even further for the full stable release in the coming weeks.

We hope that you’ll enjoy using the Zorin OS 12 Beta!